Posted on November 22, 2015 by richardandlisa

The people of France are on our minds.

We hear the news and feel compassion for the Parisians and French. It’s hard to know what to do to help, to make a difference. Some people may never have the desire or means to go to France; others will have a flood of memories, some good and some of unpleasant and trying times while in that country. Most people feel compassion and seek connection.

With media and online news, tragedies that occur far away make our big world seem oh-so-much smaller. Yet, we still might wonder how this applies to or affects us. What happens elsewhere seems far away geographically, and yet so close. What we may not realize is that in small towns throughout France, they appreciate and celebrate what Americans have done for them.

Today, the people of France are on our minds.

I have been fortunate enough to visit France on several occasions. My husband and I have led group tours for over 20 years and on a recent visit we were in TarasconTarascon, France on the day the “Fete de la Tarasque,” a hometown festival which occurs on the last Sunday of June every year. This is a festival honoring a misunderstood creature from the Rhone River that later becomes a symbol of forgiveness and understanding. When we were there, it was a particularly special and larger celebration as it was the 70th anniversary of the WWII invasion of the Allied Forces into Provence.

It was a beautiful sunny day with a slight breeze. On the walk to town there was the distinctive rumble of engines from heavy trucks, tanks and equipment. Looking down from the road to the river bank there appeared to be an American WWII encampment.

The attention to detail with authentic equipment and costumes was
impressive. There was an atmosphere of gaiety mixed with a serious sense of occasion. The encampment was brimming with American history and nostalgia. Inquiring of one of the re-enactment soldiers “why not French, why not British, why so much United States?” He says they owed much to 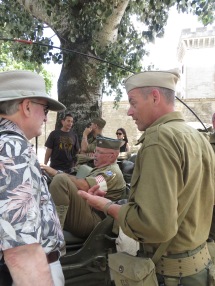 In 1944, the Allied Forces focus in France had been on Normandy. Provence had been left to fend on its own against the German and Italian occupiers. Churchill had called the operation to go help Provence a “bleak and sterile exercise.” However, Eisenhower and US military leaders thought otherwise. July 1944 operation “Dragoon” began; by September 1994 the French were in control of Provence again.

“We have never forgotten that the Americans stood up and fought for us.” The soldier explained.

Over 300 re-enactment volunteers gathered on this weekend to celebrate the history of Tarascon and to laud the WWII US Military led operation that returned their towns to them. To honor — us. The U.S.A. — that includes me. I couldn’t feel prouder or more aware of being an American. It was hard to wrap my head around this show of appreciation. If I had a magic wand, I would have transported everyone in our small town to be

there to share in the honest gratitude for something that was done on our behalf so long ago.

Of course, there is a parade. A local told us the best spot to watch (right beside the Castle of King Rene) and we waited. We waited three hours. It takes time to organize a legendary river monster and a whole brigade of military personnel.

A French family joins us in our prime spot, they are full of USA

enthusiasm and dressed to show their appreciation of America. They speak almost no English; with my limited French I understand that they are thankful for what the United States has done for their town, their country. We stand side-by-side enjoying, cheering and being together.
Today, we and the people of France, are one.

What can we do to help? Go online, search: “What can I do to help Paris?” There are many options. Right here, right now — Embrace opportunities. To understand. To encourage. To support others. We must be bold.

Richard is the photographer, typically. Lisa is the writer, typically. We've both been know to cross-genre...is that allowed?
View all posts by richardandlisa →
This entry was posted in Lisa Writes. Bookmark the permalink.