Posted on September 19, 2016 by richardandlisa

In preparation for The Creativity Workshop that Richard and I attended in Crete we were asked to bring one item from our childhood that was significant. I knew from the start what I was going to bring — and hopefully — what I was going to do. The first image that came to my mind no matter how I tried to think of something else was the pink dress. 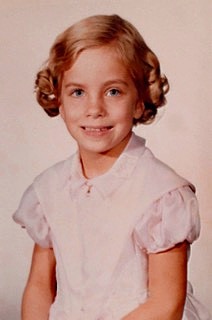 It was my Easter dress in 1966 when I was seven years old. It definitely was my best, and favorite, dress and I wore for my school photograph. Complete with a little pearl necklace, perfectly curled hair and an adorable smile on my happy little girl face.

I loved that dress. Every time I put it on I felt beautiful and special — like a princess. It was pale pink chiffon with white lace and pearlesque buttons, cap sleeves, Peter Pan collar, big bow tied in the back, and the satin slip’s lace was heart-shaped. It was the sort of dress that Grandma probably bought because buying three little girls dresses this pretty was more than Mom would spend.

I wore that dress until it was too small for me. I put the dress on its own pink padded hanger and hung it in the back of the closet. My intent was to keep it until I had a little girl of my own and she would wear it and feel the same way I did. A mini me princess.

Fate can be unkind. I never had that little girl. Still, I hung on to the dress. After our Mom died, my sister Cindy visited and we decided to sort though and ‘deal with’ handed down family items. We have evolved into a family that believes, “If you’re not going to use it, let it go.” My sister Tracy is best at this, Cindy is good too, but me — not so much. It isn’t easy because I feel that everything has a story and my sense of ‘use it’ is different from my sisters.

Cindy knows the story behind items is important to me so part of the dealing with the old family items was to tell their story one more time and then let them go. We come to the pink dress. She patiently listened to my story of the dress and she lets me decide that maybe it is worthy to go to an antique store.

At the antique store the very nice woman appropriately ‘oooed’ and ‘ahhed’ over the dress; and then offered me five dollars. She said, “I’ll hang it right on this door. It’ll look pretty, but probably nobody will ever buy it.” I said, “Thank you, but I don’t think I’m ready.” I left with the little pink dress and when I got to the security of my car I cried. I hung the dress back in my closet.

So when we get the notice from The Creativity Workshop to bring a significant item from our childhood, I think of the dress. Maybe it’s time to let it go.

The small group at the Workshop in Chania listened as I told the story of the dress. They marveled at it adorableness, that I kept it this long, and brought it with me to Crete. I hesitated a moment, then said, “This isn’t easy, but I’m ready to give it away. I need to let it go.” Lynn said, “I know that won’t be easy.” Nathaniel said, “Hey! Did you see the little accordion girl on the Old Harbor?” Everyone in our group had, including me. Renee said, “Wouldn’t it be cool to see her in this dress?”

It took four nights later before we were down at the Old Harbor late enough for the street performers to be out. We chose a restaurant close to where we had seen the little girl before. Before we finish our meal, two little girls appear. One has an accordion strapped on her small frame with a plastic cup for coins taped to the front of her accordion. The other little girl tagged along, like little sisters do. They were dressed in tattered clothes, dirty, no shoes, dark hair, dark skin and dark eyes. They didn’t smile easily as they were there to do a job.

They positioned themselves by the fountain in the main square and the accordion girl half-heartedly made some noises, her eyes darted to-and-from the people passing by looking for the most likely to give a donation to this less-than-enthusiastic artist. Not satisfied with the location, the girls moved to another spot, then another, then they disappeared. I’m not worried, I know they’re around somewhere and when we’re done with dinner, we will find them.

Most people walked by averting their attention from the little girls. There was a judgmental feeling of being manipulated because these are children and they shouldn’t be begging as they put out their hands and pleaded, “Puh—lease.” Yes. Yes, it is heart-wrenching to see children either honestly pan-handling for pittances or being coerced into portraying pitiable, dirty, begging children.

At one point, I found myself looking for excuses of this not being the ‘right’ little girl. “Oh, look!” I disappointedly said to Richard, “She’s out-and-out begging.” “Does she even know how to play that accordion?” While I watched, she smacked her little sister and spoke harshly. I wondered if she’s ‘worthy’ of a pretty pink dress.

I stopped my thoughts. Shame on me. Ultimately, none of this mattered.

We walked to the girls as they moved once again to a ‘better spot’. “Little girl! Little girl!” Richard called out. They came and stood before us. I bend down to eye-level with her as I put a coin in her cup I asked, “Can you play some music?” She obliged with some rushed discordant notes. Without losing eye-contact, I reached into my bag while saying, “I have a gift for you.” She looked dubious, “A gift? For me?!” Her little defiant face crinkled with a curled lip, scrunched nose and squinted eyes. “Yes, for you.” I emphasized as I pull out the dress to its full pale pink glory and held it towards her. I knew it will fit perfectly.

Her breath was visibly and audibly taken away.

Her eyes got big, her mouth dropped, time stopped, then she whispered, “For me?” “Yes,” I choked back, “for you…a gift.” Her little sister tried to touch it, but she turned away shouting defensively, “No!” I looked at the younger sister, “Someday, it will fit you, but not yet.” I wish I had two pretty dresses.

The little accordion girl clutched the dress tightly unsure what to do with both her new treasure and the accordion, she both clung to and stared at it in amazement. I could tell she was escaping into a new world of dreams unimagined. She and the dress are one. She no longer knew anyone was there, it was just her and a pretty dress.

It both hurt and healed my heart to give away this the little pink dress which had been so much a part of me. I turned my back to her, but Richard continued to watch her stunned face as she adored her new dress. A few minutes later he hugged me and looked to find her one last time. In the setting sun of the Old Harbor I saw her as she held the dress up to herself and did a little twirl. I could see it on her face — she now owns the most beautiful dress in the whole wide world. No matter what else might happen in her life, at this moment, she is a princess.

Richard is the photographer, typically. Lisa is the writer, typically. We've both been know to cross-genre...is that allowed?
View all posts by richardandlisa →
This entry was posted in Lisa Writes, Travels. Bookmark the permalink.

4 Responses to The Pink Dress